By Sinead McBreen. Today is World Down Syndrome Day 2018. In our home in Knockbride, Co Cavan, my husband, myself and our four children will be celebrating the event with our little daughter Grace, just like the many thousands of Irish families with a child with Down Syndrome.

We will be celebrating for two reasons, the first of which is very personal.

In the weeks before Grace was born, myself and my husband Martin were told by doctors that the outlook for our pre-born child was extremely bleak. In the womb, Grace developed a condition which we were told can lead to pre-natal heart failure. We were warned that Grace wasn’t going to survive and we should pick a plot in the cemetery so that it would be less difficult when the time comes. We were told over and over again that our pre-born baby was “incompatible with life”. We were encouraged to explore our ‘options’.

Not only was that advice deeply hurtful, but it was wrong. We refused to give up on Grace.

Grace was born at 37 weeks by planned Caesarean in November 2014. Yes, she had Down syndrome but she was perfect in every way.

She was a ‘miracle baby’ who defied all the medical odds to survive.

I don’t fault the doctors who diagnosed Grace with a so-called fatal foetal abnormality. They truly believed the outcome from what they saw on the scans. Nevertheless they were wrong. But I would never have known this if we hadn’t continued with the pregnancy.

Now Grace is a thriving little girl, and the joy of our life.

The second reason we will be celebrating today is that, finally, the world is recognising the unique qualities that Grace, and millions of children like her, bring to the world and draw out of people.

As a society, we have advanced so far in our respect and support for people with disability.

Only recently I read about a Down Syndrome Irish teenager who landed a modelling contract and made her debut at Belfast Fashion Week.

Kate Grant, a 19-year old from Cookstown, was inspired by Australian model Madeline Stuart who also has Down Syndrome. Stuart has strutted the catwalks of New York Fashion Week and has her own fashion label.  More recently, Gerber, a global baby foods brand, chose a baby with Down Syndrome to be its ‘face of 2018’.

These developments are a massive cause for celebration. Thankfully society’s views on special needs and disability has changed radically over the past decade. 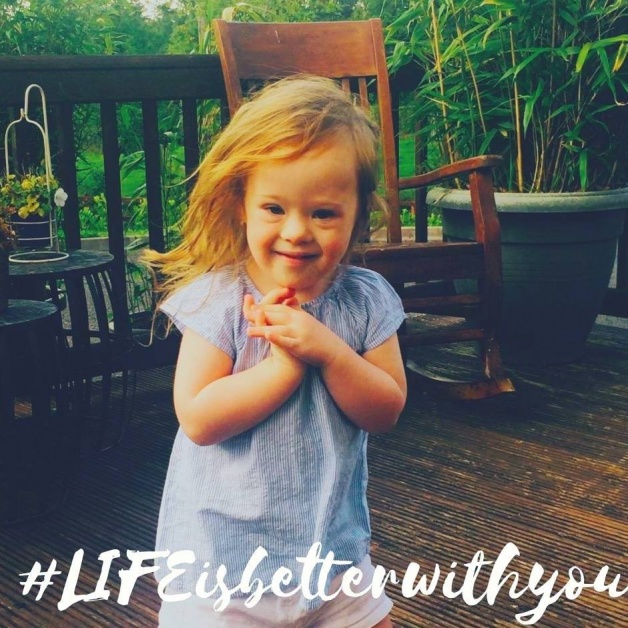 As a proud Irish person, I like to think a catalyst for that change was an unforgettable event in Croke Park in Dublin 15 years ago: the Opening Ceremony at the Special Olympics, on a summer’s evening in June 2003. Hundreds of athletes demolished our prejudices and perceptions of disability in one fell swoop.

The Games’ most enduring legacy was even more profound, however. No longer did society regard people with life-limiting conditions as victims but as individuals with limitless potential. They had voices of their own that had to heard, and like Grace they had a powerful story to tell the world about dignity and endeavour in the face of overwhelming odds.

That is definitely another cause for celebration.

But 15 years later, as we mark Down Syndrome Day 2018, what is a not a cause for celebration is the way in which public debate over the forthcoming referendum on the 8th Amendment appears to be pitching parents of children with Downs Syndrome against each other. This is heartbreaking to watch. But what is equally heartbreaking to watch is attempts by some to silence those who raise concerns over national health screening programmes that seek to eliminate Down Syndrome babies altogether.

Surely we can find common ground on this point?

Driven by the experience of raising her son Olly, who has Down’s syndrome, ‘Bridget Jones’ actress Sally Phillips has waded into this sensitive debate. She explored the ethical implications of screening policies that strive to eliminate the condition in her thought-provoking documentary ‘A World Without Down Syndrome’.

Philips, who is pro-choice, investigated a thorny subject that begs the question: what sort of world do we want to live in and who do we want in it?

While looking into the diagnosis and high rate of termination for expectant mums who are likely to give birth to a Down’s baby – which is currently running at 90pc in England – she asked: “Why is everyone behaving that it’s a catastrophe?” She also visited Iceland, which has a 100pc termination rate in Down’s cases after the introduction of the prenatal test.

So, on this day when we celebrate the dignity and endeavour of people with Down Syndrome all over the world, it’s time to ask if we as a society are sending out apparently contradictory messages on how we treat disability. Does outdated thinking on Down Syndrome still prevail in Ireland? Or can we truly say that our society no longer regards people with life-limiting conditions as victims but as individuals with limitless potential?

If the latter is the case, then that’s certainly something to celebrate.