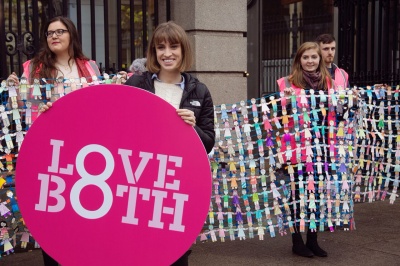 The paper chain of people on display represents the 5,000+ children born each year, thanks to the Eighth Amendment. It is a conservative estimate based on the actuarial analysis of comparative abortion rates in culturally similar European countries. This independently produced report, commissioned by the Pro Life Campaign, was published in 2016. There are lots of areas that the Oireachtas committee on the 8th Amendment never examined. Ignoring the evidence of lives saved by the 8th is one of them. 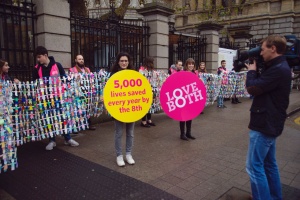 We know that many people have been saved by the Eighth. There are thousands of families like this throughout Ireland but the Oireachtas Committee Oireachtas committee on the 8th Amendment showed no curiosity or interest in listening to any real life stories like this that challenged the case for doing away with the Eighth Amendment.

In many European and western countries one in five pregnancies ends in abortion mainly for social reasons. The abortion rate for Irish women (carried out mainly in Britain) is a small fraction of that, thanks to the Eighth Amendment. There are many stories of mothers who initially contemplated abortion, only to change their minds. Today, they cannot believe they ever entertained the idea of ending the life of the child who now means the world to them. 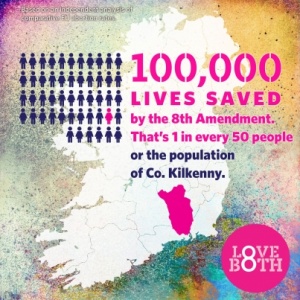 The 5,000+ saved annually include children whose parents are given more time to reflect; children diagnosed with disabilities that routinely lead to abortion in other countries; children with life limiting conditions who are welcomed into the world, however briefly; children whose fathers have a say and were given time to offer real support; children of mothers who are persuaded of the value of adoption.

Laws change our attitudes and beliefs. When you legalise something you make it normal. And when you make something normal, you get more of it. That’s why the abortion rate in other countries is so surprisingly high. And that’s why there is no such thing as restrictive abortion. There is no excusing this omission by the Oireachtas committee on the 8th Amendment and it rightly leaves the committee open to the charge of extreme bias. But these photos have been spread throughout the country, and we want to thank the volunteers who built this chain. 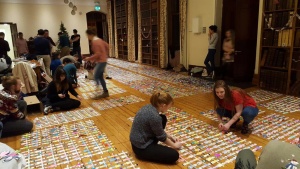