Reason 4: 90% of babies diagnosed with Down Syndrome in Britain are aborted

In a country like Ireland where the Special Olympics has become one of the largest and most successful volunteer organisations in the country, it’s hard to imagine unborn children with disabilities or Down Syndrome being denied the chance to fulfil their potential.

But that’s exactly what happens when abortion is allowed. Abortion allows discrimination and the repeal of the Eighth Amendment would be the first, devastating step towards a world where the 9,000 athletes and 25,000 volunteers in our Special Olympics are not given the value and protection that they deserve.

We only have to look to England and wales to see the devastation that abortion wreaks on disabled children.  The 1967 Abortion Act set in train a motion whereby today, abortion is allowed up to birth for children who are diagnosed with any disability whatsoever. 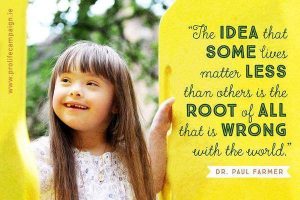 That is perhaps most horrific for babies who have a condition like Down Syndrome that can be detected in the womb.  What does this mean in reality?

These facts are horrific to us, and rightly so.  After all, Ireland respects people with disabilities.  The idea of “screening out” children who are different in some way goes against Ireland’s life-affirming culture.  But while these facts may strike us as something out of a modern day horror story, they’re a reality in the world and are caused by abortion becoming normalised, by the idea that there is such a thing as a “perfect human” and abortion can be used if an unborn baby doesn’t meet this mythical standard.

What should the #loveboth response be?

In Ireland, we’re lucky.  We have our Special Olympics.  We value people with disabilities and we’re working every day to make the country a better place for them.

All of these efforts begin with the Eighth Amendment.  Guaranteeing the rights of people with disabilities begins with protecting their first right, the most fundamental right of all – the right to life.