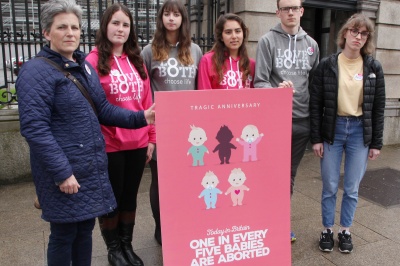 The only way to prevent Ireland’s abortion laws becoming like those in Britain is to vote “No” on the 25th May. LoveBoth was commenting at an awareness event held to mark the 50th Anniversary of the coming into force of the Abortion Act 1967.

“Today is a sad day for Britain where over 8 million babies have lost their lives to abortion since the Abortion Act came into force. In 1967, the public were told that the legislation being introduced was ‘restrictive’. Instead, the abortion rate has climbed ever since and today in Britain, 1 in every 5 pregnancies ends in abortion.

“Much like politicians in 1967, Minister Harris has called his abortion plan ‘restrictive’ but the experience in Britain proves that there is no such thing as ‘restrictive’ abortion. The Irish public deserves to know that what Minister Harris has in store for us is even more extreme than the law currently existing in Britain. It would introduce abortion on demand up to 3 months, and in vague, undefined circumstances thereafter. There is no similar provision in the current British law.”

Ms. McCarthy was joined at the event by supporters of LoveBoth, and by Caren Hallahan, a nurse who worked in Australia where abortion is legal.

“We have a chance to learn from the mistakes of countries like Britain where babies’ lives are ended in such huge numbers. The only way to stop abortion on demand coming into Ireland is to Vote No on 25th May.”