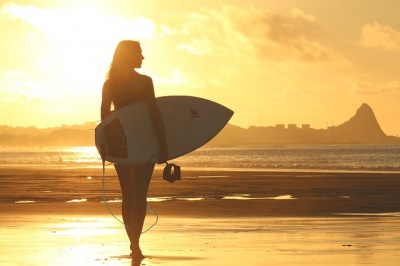 Most people would not see this last point as an obstacle in a career path. But then again, most people are not ruthless sponsors.

After Blanca announced her pregnancy last year, her main sponsor dropped her. Others soon followed. Blanca was soon left without an income or a means to further her career and support her young son, Noah.

What’s most shocking here is not so much the sponsors’ rejection but rather the ideology that a woman, leading in her profession, is denounced for wanting to be a mother. Blanca was adamant that becoming a mother would not detract from her career. Like many other women today, she simply wanted a career and motherhood—not an unreasonable desire.

After having her baby, Blanca refused to give up on the windsurfer ranking. And now, seven months after giving birth, she has been proclaimed Champion of the Windsurfing World in the Raceboard Class—and without any sponsor! This courageous woman sailed onwards with the support of her family and friends and most importantly, her son Noah.

In an interview with the Spanish newspaper Marca, Blanca explained:

“I have had sponsorships since I was 15…and nothing like this has ever happened to me. The problem is the concept held that a sporting woman who becomes pregnant at age 29 is never again going to do anything, as if her career were finished.”

Blanca also pointed out the personal financial impact of the loss of sponsorship: “I have been training seriously for four months and have spent almost 4,000 euro from my own pocket.”

For the many sportswomen at the top of their game, the mere mention of having children carries the implication that they are then unfit to compete in Sport. Pregnancy is not an illness! Sport sponsors need to realise that the way these women got into shape prenatally is how they’re likely to get back into shape after giving birth. Women must be free to become mothers without this decision overshadowing their professional careers. Mothers need support and babies need protection.

This is one of her last tweets: “8th in the World Cup The Chinese take the medals but I take that if you want YOU CAN! Super happy!!”

Blanca, our very best wishes for Tokyo 2020 Olympic Games—go, Girl, you can do it! #LoveBoth #proWoman