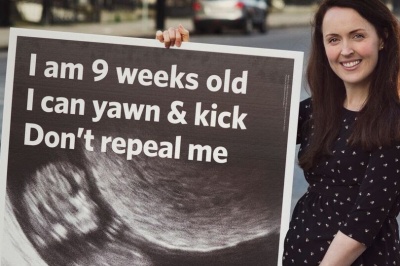 Áine Kierans holding a LoveBoth poster showing a photo of her baby at 9 weeks old.

Responding to criticism of a LoveBoth poster by Dr Fergal Malone in today’s media, where he said unborn babies cannot yawn as there is no air in the womb, Áine Kierans whose baby is photographed at 9 weeks old in the poster said:

“Fergal Malone’s criticisms of a poster depicting my baby are essentially ridiculous. Everyone knows that there is no air in the womb, yet everyone knows that babies suck their thumbs in the womb, so does my baby. Even though there is no air, I have seen my baby yawning and sucking her thumb at various stages of development. He is ignoring the development of my unborn baby. The facts on the poster are also supported by clear references in embryology text books*.”

Everyone knows that a baby can yawn, kick and suck it’s thumb in the womb. Of course, there is no air, but the baby is still yawning and thumb sucking. We can see it with our own eyes. Dr Fergal Malone is not being accurate #MaloneIsWrong #BelieveInScience #LoveBothVoteNO pic.twitter.com/2JNWSxYxfW

Also commenting was Geraldine Martin from the LoveBoth campaign who stated:

“We are glad however that Dr Malone has entered the debate on this referendum as we would welcome an actual debate with him regarding his expressions of support during recent Oireachtas hearings, for a law that would permit abortion where an unborn baby has very special needs.

“We would welcome Dr Malone explaining to the Irish people how children diagnosed with disabilities should be protected from abortion, particularly in light of the fact that unborn babies with Down syndrome can be detected with 99% accuracy at 10 weeks and this government is planning to allow abortion on request up to 12 weeks. In some European countries where abortion is allowed without clear prohibitions on abortion for disability, huge numbers of babies (over 90%) diagnosed with Down Syndrome are aborted. Dr Malone himself has told the Oireachtas committee about the accuracy of new testing, so perhaps he would like to comment on the abortion rates of children with Down Syndrome in other countries.”