A Love Both media conference in Dublin heard from three parents that faced pressure from clinicians in Ireland to terminate their pregnancies following diagnosis of chromosomal conditions.

Sinéad McBreen, a nurse, said she came under “enormous pressure” from doctors to abort following a diagnosis of Down Syndrome. “I was asked to consider abortion and was told her life had less value than my other children. She is entitled to have a voice.” She is the founder of an initiative that delivers gift baskets to the newborn children with disabilities.

Monica Hadarean said she too faced pressure and she will always remember “the way they looked at us when we rejected having the [amniocentesis] test.” It was after her 20-week anomaly scan that she was informed by her consultant about a chromosomal defect like Down’s Syndrome or Edwards’ Syndrome. 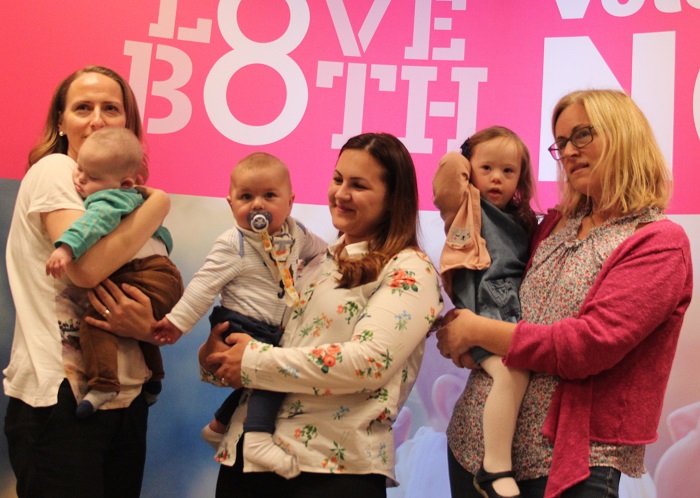 Monica Hadarean, Diana Gherasin and Sinéad McBreen with their children.

Diana Gherasin received a similar diagnosis: “I was told that my pregnancy had lots of complications and my baby would most likely not survive until the end of pregnancy. I was presented with the option of terminating the pregnancy so I wouldn’t put myself through the loss of my baby later in the pregnancy and was told that my husband and I were still young and healthy and we could have another child.” Her child is now a healthy one.

Love Both legal adviser Prof William Binchy and obstetrician Dr Trevor Hayes, said that prenatal screening can be performed as early as the ninth week of pregnancy. This information coincides with statements made by Dr Fergal Malone in 2014. Dr Mahony corroborated them on Wednesday, 9th May, during RTE Radio 1’s News At One.

As we can read on The Irish Times, the Government has said it will legislate to allow abortion without restriction up to 12 weeks of pregnancy if the Eighth Amendment is repealed (see General Scheme on pdf). Minister for Health Simon Harris has ensured that abortion on the grounds of disability will not take place in Ireland if the Eighth Amendment is repealed.  Dr Boylan recently stated that “women will await the full diagnostic test with 100% accuracy, which is usually available after 12 weeks gestation.”

The Love Both campaign has challenged that assertion.

Dr Binchy said: “He must be alone in that view. If a person is told there is a rigorous 12-week application of the law. It is now 10 weeks… and you have 99% certainty you have a diagnosis of Down’s Syndrome, will they wait for confirmation to move from 99% to 100%?”

Dr Hayes cited the termination rates in Iceland and in the UK following diagnosis and said he would “hate to see Irish society with no more babies with Down’s Syndrome. It would defile the core identify we have of being Irish.”