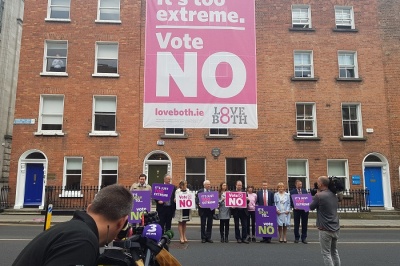 Today on Kildare Street, members of the Oireachtas gathered together with volunteers from the Love Both campaign and Barrister Benedict Ó Floinn BL, to highlight the far reaching, and extreme abortion legislation planned by the Government if it wins tomorrow’s referendum vote.

“The Government has plans to introduce the most far-reaching abortion laws any Irish government has ever proposed in the history of the state, including abortion on demand up to 12 weeks, abortion on vague mental health grounds which are frequently abused in other countries up to 24 weeks, and potentially abortion up to birth in other ill-defined circumstances.”

“The Government is proposing to have all constitutional rights removed from unborn babies, this is not a limited amendment but a demolition of a key right in our Constitution. This Minister for Health has published legislation which will be introduced if the Eighth Amendment to the Constitution is repealed; it goes far beyond dealing with limited difficult cases. The only way to prevent the adoption of an extreme abortion law is to vote ‘No’ tomorrow, Friday at the polling station.”

Speaking at the event was Mary Butler TD, who stated:

“Some voters are wondering if they should vote for the proposal to deal with the tragic cases we have all heard about, but the Government has cynically used the tragedies of certain people to push through the most extreme abortion law ever propose in this country by any Irish government. More and more people are realising that this government has planned to introduce an extreme abortion law, the only way to stop this is to vote ‘No’ tomorrow.”