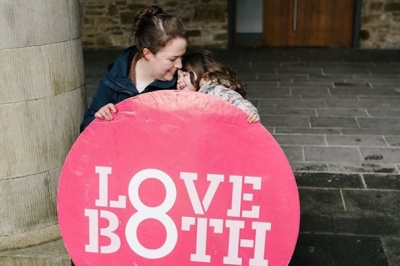 Mum and daughter in Clonmel during the Lives Saved Tour.

If publicly funded buildings are going to be used to advertise either side in the abortion referendum, then the only fair thing to do is to allow both sides equal time and space. This is our reaction to the decision of the Project Arts Centre to remove Maser’s pro-repeal mural from the front wall of the building.

“From the information publicly available, this decision by the Project Arts Centre was taken after advice received from the Charities Regulator who took an opinion on whether it was appropriate for a charity like the Arts Centre taking part in such a political campaign.

“It’s important to say that LoveBoth had nothing to do with this decision.  We have repeatedly asked the Project Arts Centre to allow us to paint a mural depicting the harm caused by abortion on its building, as it is deeply unfair to allow a political mural for one side of the debate only to be painted on a publicly funded charitable body.  Despite our repeated requests for equal access to space in the Project Arts Centre we have received no access, nor any realistic prospect of access in the time remaining before the referendum.

“Perhaps the artist Maser was trying to be ironic by painting a picture of a heart to support abortion the Government’s abortion on demand plans.  However, people must know that the first thing abortion does is to stop the beating heart of a small unborn child. If artists want to promote respect for all people, then they should be calling for a ‘No’ Vote to Governments abortion plans on the 25th of May.”