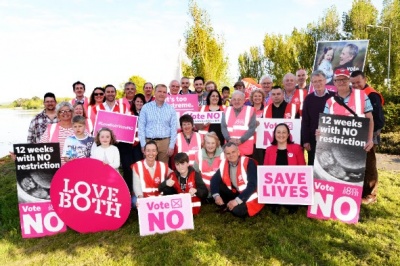 Ahead of a canvass in Carrigaline, Co. Cork, on Friday 18th May, the team of volunteers canvassing for a ‘No’ vote with the LoveBoth campaign was joined by Michael McGrath TD, Fianna Fáil spokesman on Finance.

“As we enter the final week of the referendum campaign we were delighted to be joined by Michael McGrath our local TD who lent his support to our efforts. We are hearing more and more voters on the doors who are telling us that they have changed their vote from a ‘Yes’ to a ‘No’ as they have become increasingly aware of the extreme nature of the Government’s proposal to introduce abortion on demand if the Eighth Amendment is repealed.”

“The television debates have made it very clear that what the Government is proposing is not limited abortion to address some of the difficult cases, but abortion without any reason up to 12 weeks and on unspecified mental health grounds up to six months. Many people did not realise just how far Simon Harris is planning to go if we hand the Eighth Amendment over to the politicians and that’s why people are increasingly turning their ‘Yes’ into a ‘No'”, Ms. O’ Hanlon concluded.