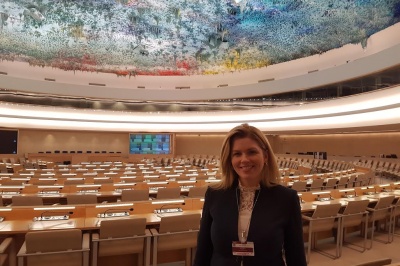 Sinead Slattery, in the United Nations, in 2016.

My sister was born with an “abnormality”. Doctors said she wouldn’t live beyond two days and, if she did, then she would have zero quality of life. They also told us she had Down’s Syndrome. What they couldn’t tell us was that she was a fighter who lived very full life until the age of 22.

She was not defined by her illness; she was defined by her humanity. She had a beautiful singing voice and taught my siblings and me how to be patient and to think for ourselves. She was not “abnormal”, she was unique and beautiful. And she is the reason why I have the courage and passion to pursue this civil rights issue.

The battle for the language

When it comes to abortion, you often hear pro-choice campaigners saying that a foetus should not be given the same human rights as a grown woman because it may only be the size of a grape or a walnut. This is a very subtle way of dehumanising these babies and once we strip them of their humanity then we start to treat them differently.

The same thing happens when seriously ill babies are described as “abnormalities” when they have a life-limiting condition. Years ago, we identified people in our census form as “idiots”, “imbeciles” and “lunatics”. Language like that would rightly never be tolerated in today’s society, yet pro-choice campaigners insist on using terms like “fatal foetal abnormalities” to describe babies who are very sick.

We are always growing and developing through the different stages of life. When my daughter was 3 weeks old in my womb, her heart started to beat. At 12 weeks, she was sucking her thumb. All of her major organs were developing. Today, she is 9 months old, has just learned to crawl and is exploring the world by touch and taste. Is she less developed than a 12-year-old schoolgirl or a 38- year-old technology multimillionaire who is changing the world? Certainly, but she has the same right to be alive.

A baby in the womb is not a “potential human”. He or she is a human being with potential who deserves to be protected just like any other. The 8th Amendment values the life and health of mother and baby, and pursues the wellbeing of both. This is what we want from a compassionate society and it is the reason why I believe we need to ensure that the 8th Amendment remains in place.