Reason 8: In the UK, 1 in 5 pregnancies end in abortion

We become so used to hearing these phrases that it’s easy to forget that they simply don’t exist. Abortion isn’t something that can be contained.  Once it has been introduced into a country for a certain ground – any ground – it becomes only a matter of time before the grounds are extended and abortion becomes available on every ground. 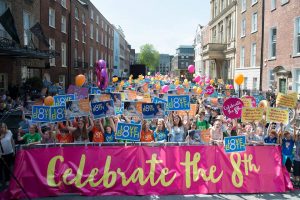 That’s the experience of other countries.  We only need to look to England and Wales. Abortion was introduced there in 1967 under the Abortion Act.  At the time, the abortion rate was 1 in 40 pregnancies.  Within five years, it had jumped to 1 in 7. Today, it’s a staggering 1 in 5.

That means that for every 5 pregnancies, 1 of them ends in abortion. There are other shocking statistics too.  90% of babies diagnosed with Down Syndrome in the womb are aborted. Abortion is available up to birth for babies who have any disability.[1][2]

What went wrong in England and Wales?

So what went wrong in England and Wales? Why didn’t the promise of “restrictive abortion” made in 1967 come true? The reality is that once abortion is introduced to a country, a very sinister comment is made on the value of human life itself.  We’re saying that some lives can be ended, some lives don’t deserve the protection of the law whether due to disability or some other circumstance.

And that changes things. It changes how people feel about abortion and about unborn babies.  They’re not given the same value as countries where abortion is not allowed.

Ireland is by no means perfect, but our abortion rate much lower than the 1 in 5 rate in England and Wales and the work of the Love Both Project is going to help reduce our rate further and protect more babies and support their families.

Think again about that 1 in 5 figure and think about 5 of your close friends.  Which would you do without?  Let’s not be faced with that choice.  Instead, let’s #loveboth.