I don’t underestimate the enormity of a crisis pregnancy for any woman, at any age for any reason.

I can deeply appreciate the anxiety felt by a young college student who may feel that her crisis pregnancy means that she can no longer finish her education, travel the world and build her career. In this situation she may feel that she has to choose between the ending of her life by giving up on her dreams, or the ending of her unborn child’s life by opting for an abortion.

There are a myriad of different reasons why a women will choose an abortion but if we as a society legalise widespread abortion then what we are saying is that it is easier to terminate a human life, often violently, than it is to enhance the support a women needs at this vulnerable time. And by enhancing this support it is all women who will benefit not just those in crisis pregnancy. 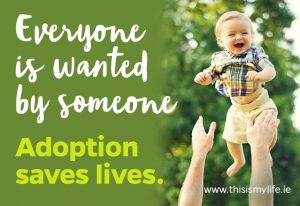 An example of how we can “Love Both” is through the promotion of adoption as an option in a crisis pregnancy. I say this with the utmost sensitivity and understanding of what a difficult and heroic act it is to hand your baby over for adoption. I think it must be particularly difficult to opt for this option in current Irish society where so few do so and so it becomes more and more difficult for others to do the same. However the more the option of adoption is discussed at national and local level, promoted by government, adoption agencies and marketing campaigns; the more culturally acceptable it will become for those to do it.

We must work at this – the Adoption Authority of Ireland issued their Annual Report in 2015 where they stated that there were only 7 lives presented for adoption in Ireland even though hundreds of couples have been declared suitable to adopt.

These figures show how much we need to do but the benefits of adoption are obvious; the unborn child receives the gift of fulfilling their lives under the loving guardianship of a couple who are unable to conceive a child of their own. The college student gets to continue her studies, travel the world and build her career, whilst knowing that her child is being cared for by a couple who are in a position to do so.

There are millions of lives saved today worldwide because of adoption. One of these was Steve Jobs, Founder of Apple who testified to the importance of adoption in his life and the gratitude he had for his mother by saying –

“I wanted to meet my biological mother…. mostly to thank her, because I’m glad I didn’t end up as an abortion. She was twenty three and she went through a lot to have me”.

These words are a wonderful testament to the courage of women who continue with their pregnancies and allow their babies to be adopted.  And they are words of encouragement for everyone who believes in the vision of the Love Both Project; that a more positive alternative is out there if we’re just willing to search for it.