It’s easy to overlook the lifesaving effect of the Eighth Amendment but we do so at high risk.  It’s one of the most exciting aspects of the provision, and it’s one of the main reasons why we would come to miss the Eighth so much if it were repealed.

The Eighth Amendment stands alone as a beacon of international human rights protection and those are not just words.  There are people alive in Ireland thanks to the provision.

People like Mary Kenny.  Mary was a student when she faced an unplanned pregnancy.  For many women in her situation who live in countries where abortion is available, it becomes the obvious solution.  Instead, Mary was able to take the time to really think about what she could do with her life and as a result, she decided to reject abortion and as a result her daughter Hollie was born.

They’re people like Emma from Co. Kildare, who also faced an unplanned pregnancy but, like Mary, rejected abortion.  Today she is the happy mother of baby Rossa.

There are many more people in Ireland like Mary and Hollie and Emma and Rossa. They’re your family members, neighbours, friends.  You may not even know who among your immediate group of family and friends would not be alive but for the Eighth Amendment.  So many people say that the fact they had to plan to travel to England for an abortion meant that they had to spend a bit more time – they had a chance to think, to reflect on the unborn life that had begun and which deserved to protected.  And they had time to change their minds and instead start planning for the birth of a new human being.

Thanks to the Eighth Amendment

It’s up to all of us to think about how much the Eighth Amendment has contributed to our society.  An independent report commissioned by the Pro Life Campaign looked at just how many lives have been saved by the Eighth.  Essentially it asked what would Ireland looked like if there was no Eighth Amendment – if the referendum had failed and abortion had been introduced to Ireland in 1994?

What the report found was that at a conservative estimate, 100,000 people are alive in Ireland today thanks to the Eighth Amendment. Because abortion is not available here, our abortion rate has stayed relatively low compared to other countries.  In Ireland, 1 in 19 pregnancies ends in abortion.  In England and Wales, that rate is 1 in 5.  So if Ireland had had the same abortion rate as England and Wales since 1994, some 196,000 Irish citizens would not have been born.

The facts aren’t related to religion either because the report took the example of Spain, a country with a Catholic ethos but the same result turns out – 121,000 Irish citizens would not have been born. 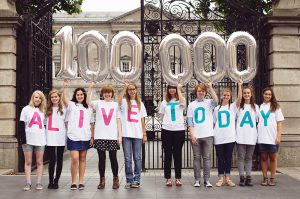 So what does it all mean?

Lives are being saved.  Every day.  Thanks to the Eighth Amendment.

There is no doubt that we need to do more to support women who find themselves facing unplanned or difficult pregnancies.  It is a tragedy that any woman feels the need to travel for an abortion.  But there is so little talk about the people whose lives have been saved by the Eighth Amendment.  That’s surely something to celebrate.