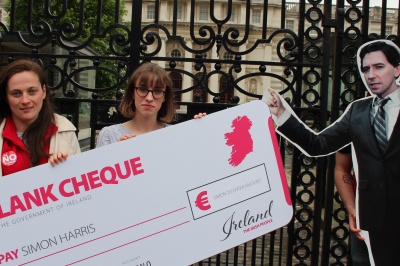 Yesterday afternoon, at Government Buildings, Clare McCarthy of the LoveBoth campaign, joined by supporters, handed a symbolic ‘blank cheque’ into Minister for Health Simon Harris‘s office symbolising the decision before the Irish people in the referendum on 25 May.

Commenting on the event Clare McCarthy stated: “Today’s blank cheque symbolises exactly what we are being asked to hand over to the Government on 25th May if people vote ‘yes’ to Simon Harris’s abortion on demand proposal. If the Eighth Amendment is repealed we will be the first country in Europe to place a right into the Constitution by popular vote only to remove that same right. It is important to remember that the Government does not simply want to repeal the Eighth Amendment but wants to put in new text that will hand over all power to politicians so they can have the final say on the law on abortion. We should not and cannot trust politicians with the most important right of all: the right to life.”

“The Supreme Court has confirmed that the only rights unborn babies have are in the Eighth Amendment.  Removing it hands a blank cheque of power over to politicians who have proven again and again that they cannot be trusted. We cannot give Simon Harris and his friends a blank cheque on the 25th of May. The only way to protect the right to life for unborn babies in our constitution is to vote NO this Friday.