My baby, John Paul, was diagnosed with anencephaly -one of those uncommon life-limiting conditions- in 2006. It was like the ground was pulled from under me in one awful moment. In the midst of the blow, one thing was clear to myself and my husband – we wanted to make the most of his short life. We wanted to try and give him as much love as we could in the weeks ahead.

We hoped that John Paul would survive until birth and that we would get an opportunity to meet him. I began to find that during this time that I was surprised by the joy of each new day that I woke up and found him kicking and making his presence known. I learned to live in the moment more than I usually would because I was so grateful that I had him with me and each moment was a bonus. In a strange way, I had never enjoyed a pregnancy so much before because usually I would have been looking ahead to the birth rather than appreciating each day of the pregnancy.

People thought of the most beautiful things to do for us and I realised that small things matter so much. My mother-in-law got my two daughters and their three cousins to each knit a portion of a little blue cardigan, which she then put together for him to wear when he was born. It was such a beautiful and loving idea. Our children talked to him and hugged him each day too.

John Paul was born at 36 weeks and lived for 17 minutes. It was late at night and all was quiet and peaceful. There was no suffering when he slipped away. I had brought him as far as I could and given him everything I could. I was at peace. 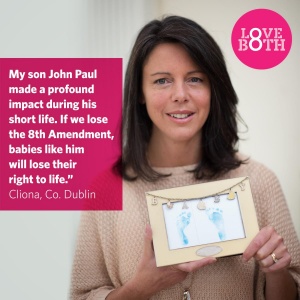 Our hospital gave us huge support

I don’t understand why abortion is suggested as a solution for babies with life-limiting conditions like John Paul. Nothing is easy when your baby has a life-limiting condition but all babies deserve care and their families deserve support. Abortion offers neither. Our hospital gave us huge support which helped us enormously. It is this kind of support which should be improved on in Ireland. Every child has something unique to bring to the world. Babies like John Paul are no different. He has changed our family for the better forever and has had a hugely positive effect on us and our wider family and friends. I am so proud of him for this. He has made his mark on the world.

Because the 8th Amendment was in place, there was every effort made for John Paul to be given the best chance at life, even if it was for a short period of time. This is one of many life-saving aspects to the 8th Amendment: that even for babies with life-limiting conditions it facilitates the best kind of protection for them and support for their parents. And it also allows the hospitals to provide a quality care.