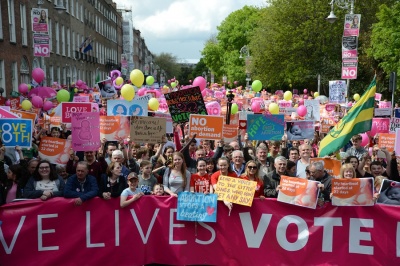 Tens of thousands of people attended the final Love Both rally in Dublin this afternoon, the last of six regional rallies which took place around the country in recent weeks.

The focus of today’s event was the extreme nature of the Government’s abortion proposal and the fact that it would inevitably open the door to abortion on demand if the 8th Amendment is repealed.

Speaking to the crowd in Merrion Square, Caroline Simons, legal adviser to the Love Both campaign said:

“If the 8th Amendment is repealed, Ireland will go from being a country that protects unborn human life to one of the most extreme abortion regimes in the world. Let us be very clear, the Government’s proposal is not about abortion in ‘hard cases’, it is about introducing abortion on demand.

“That’s the stark, sad reality of the proposal brought forward by Health Minister Simon Harris. It is even more frightening than England’s abortion law, where 1 in every 5 babies loses his or her life to abortion.

“Simon Harris’s proposal defines abortion as a ‘procedure intended to end the life of the foetus.’ The intent couldn’t be clearer. There is no mention in the proposal of making every reasonable effort to save the life of the baby when carrying out the procedure. The goal is to end a life, not save one. It has nothing whatsoever to do with healthcare.

Tens of thousands of people attended the final LoveBoth rally in Dublin. Thanks everyone! #LoveBothVoteNO #8thRef pic.twitter.com/eKq7HS29E8

Addressing the crowd, Dr Andrew O Regan of the Medical Alliance for the 8th said:

“We have heard a litany of falsehoods and exaggerations – designed to create a climate of panic – to distract from the reality of repeal – which is unrestricted abortion on demand. The fact is Ireland with the 8th Amendment is among the safest countries in the world for a woman to be pregnant. Audits of death and sickness in pregnancy confirm this. What’s being proposed by the Government is not healthcare. The proposal goes against the most basic principles of medicine: to heal, to cure to save life… never to harm and certainly never to intentionally end a life.

A young Dublin student, Gavin Boyne who was almost aborted told the gathering: “I speak on behalf of all of those Irish men and women who are alive today because ofyour efforts – to make Ireland a better and more inclusive society where respect for one another starts in the womb.

“On the 6th of May, Dr Peter Boylan launched the Together for Yes national campaign – in Athlone. He described the 8th Amendment as a ‘failed experiment’, and in doing so, has personally attacked – every single person – who is alive today as a result of the 8th Amendment. I – am one of those people.

“I think people like Peter Boylan need to be very careful when they make comments like that and they need to realise the impact their words can have on people who are alive today because of the 8th amendment.

Bernadette Goulding of the group Women Hurt told attendees at the rally:

“My doctor in England said it’s a simple procedure, it’s just removing some cells, products of conception and you will be just fine afterwards. There was no mention of the risks to my mental or physical health. The word baby was not mentioned, and I didn’t allow myself to think baby. It has often been suggested to me that my guilt was because I was a Catholic.

“I have facilitated Rachel’s Vineyard retreats in many countries, Faroe Islands, Hungary, Korea, Slovenia, Croatia, South Africa; I have heard the stories of regret and loss from women from all those countries. The tears of the Catholic, the Protestant, the atheist are all the same. The same pain of loss and regret. It is a universal experience. Like today where hardly any journalists want to talk about what repeal would mean, they also want to deny the devastating effects of abortion for so many people.

Mary Kenny, a young mum from Limerick told the crowd about her unexpected pregnancy and how her daughter Hollie is lucky to be alive thanked to the 8th Amendment. She said:

“Hollie’s life literally hung in the balance in those early stages of pregnancy and if I only had to drive down the road to the nearest abortion clinic or to my GP, which is what the Government is proposing, then I can almost certainly say that Hollie would not be alive today. The time it took to plan an abortion in England was the time I needed to change my mind.”

Cora Sherlock, spokesperson for the Love Both campaign challenged the crowd “to give it everything we’ve got in the next fortnight to protect the 8th Amendment. She said:

“This debate is not about health care. Simon Harris has published his outline for what would repeal the 8th Amendment: A vote for repeal is a vote for one of the deadliest abortion laws ever proposed.

“The definition of healthcare in countries where abortion is legal has become corrupted. The same would happen here if we repealed the 8th Amendment. Genuine healthcare is about saving life, not ending it.”

Eileen O’Riordan, mother of the late Dolores O’Riordan of the Cranberries, also said a few words to the crowd. She said Dolores was always opposed to abortion and that the O’Riordan would be voting No to repeal on the 25th of May.