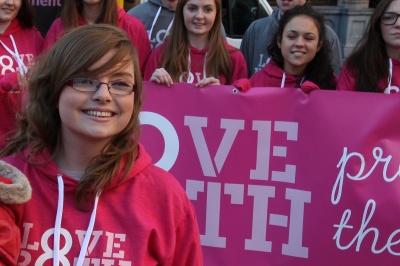 On the 1st of April 2013, I found out that I was going to be a mother, and I couldn’t have been more distraught. I was 19, in my second year of college at UL, and had a part time job in Dunnes Stores. I was very happy with how things were in my life. At the time, I thought nothing would change that, not even this pregnancy. When I saw the two pink lines appear on what I was sure would be a negative test, the rug was pulled from under me and I honestly felt like my life was over. For so many nights, I cried myself to sleep, not wanting to touch my stomach, because it’s easier to pretend there isn’t a baby growing inside you when don’t want to keep it.

My first thought was abortion. Anyone who knew me at the time was well aware that I never wanted children, I was not what you would call a maternal young woman and the thoughts of a child crashing into my life in 9 months was something I wasn’t going to allow, and it’s my body my choice right?

Soon after I found out I was pregnant, I looked up the British Pregnancy Advisory Service, what is more commonly known as BPAS, and decided that I would travel to England to end the life of my small baby. Soon after this, I realised my passport had expired and I became frantic. I ordered abortion pills online, but they never arrived.

And then, something incredible happened. I was on work placement in college, and one day in panic I broke down in tears to a colleague. I told her how I had been feeling. I told her of my plans to travel, of the hopelessness I’d been feeling, that I felt my life was over.

What she told me I will never forget. She told me that although she had a family, all of her children were adopted because she was unable to become pregnant naturally. She told me that so many women would give their right arm for what I had growing inside of me right now. She reminded me of the strong young woman I was and that this would not ruin me. At that time, those words of encouragement were all I needed to hear.

Soon after this, I had my first ultrasound scan. When I saw the clear picture of my beautiful baby on the screen, the phrase ‘my body my choice’ was well and truly thrown out the window. On that screen, I saw a fully formed little human kicking and thriving at 12 weeks’ gestation, thirsty for life! I touched the screen and tears ran down my cheeks, she was just as much my baby then as she is now. Her body was not my body, but for 9 beautiful months, I was her home and on the 19th of November 2013, my beautiful daughter, Hollie, was born. As I looked at her, I realised that instead of thinking this would ruin me, instead it was the making of me.

I continued with college and after I had completed my degree, I went on to complete my Masters where I received a first class honours. Becoming a young mother didn’t take my dreams from me, it gave me new ones. It made me more ambitious than ever before.

Every day with my beautiful Hollie is an adventure and she lights up my life in a way that nobody else ever will. Being a young mother means we met a little early, but it also means that I get to love her a little longer.

I never knew on the 19th of November that I would meet my best friend, someone that I would give my right arm to keep now, and it is all because the 8th Amendment gave me time to think. Our 8th Amendment is precious, and so is life. We ought to fight for this right to life amendment and celebrate it before it’s too late.