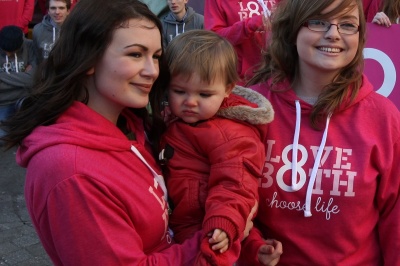 I had graduated three months from my Masters degree when I discovered I was pregnant. I had always considered myself to be pro-life but now I was on this side of things it challenged me a lot and actually dealing with a crisis pregnancy was much harder than I’d ever expected. It was very difficult accepting that I was going to have a baby, my pregnancy was extremely strenuous emotionally. I had so many worries about what the future would bring. I cried myself to sleep most nights. I felt I wasn’t ready to be a mother.

I often had suicidal thoughts throughout my pregnancy. During the first few weeks of my pregnancy my family encouraged me to go and speak to someone in a crisis pregnancy centre to help me deal with it better but I found my pregnancy too painful to talk about.

Sometimes now I think about those many, many moments when I was emotional and vulnerable. I’m so thankful that the 8th Amendment was there to stop me making a quick and wrong decision when I was feeling my worst. I often think if I had local access to an abortion when I was feeling so down I could easily have made a decision that I would have regretted later.

Looking back now I regret not speaking to someone sooner. I reached out to my maternity hospital for help at 7 months into my pregnancy, I spoke to someone from the mental health support and got the help I needed.
My beautiful baby Rossa was born on the 27th of October 2015. I am his sole carer and provider and although being a lone parent has its difficulties, it is extremely rewarding. My life has a total new meaning and I’m a happier person now than I was before my unplanned pregnancy. I’m blessed to have such a supportive family who help me with Rossa, I know so many lone parents don’t have this support. We need to work together to ensure every parent has a support system during their pregnancy and afterwards. Abortion is not a solution to a mother who is struggling like I was. Instead, we need to love both mother and baby.