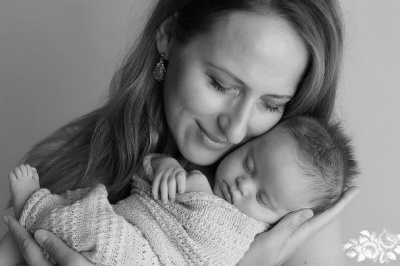 Our son is 8 months old and he has Down Syndrome. He already says mama, dada, nana!!! 🙂 The public health nurse was in tears hearing him and called it a miracle.

Doctors insisted to have amniocentesis and we refused. They couldn’t believe we didn’t want to do it. Their attitude really hurt. It seemed like we were given a death sentence. Now I can’t believe how much happiness and peace our son brought into our home so far!

A friend had gone through the same situation, but four weeks before us. Her baby had a heart defect and in the hospital [name omitted] they suspected that he might have Down Syndrome. They said that, the baby had Down Syndrome, it might not survive and that she could have the “options” for abortion up to 8 months but no further than that because she could go into labour.

This is why we said “no” to amniocentesis. I can’t tell you how disturbing it was to hear them insisting for us to do it and to telling us that he might not even survive the pregnancy. Dr. [name omitted] was in the room as well. The doctor was the one who insisted. We are still hurt. There are definitely more cases like ours out there. I met an Irish woman. Her daughter has Down Syndrome. At 33 weeks, she was told that she had “options”. She was shocked as well.

Despite all, I can’t believe how much Cris changed our lives for the better! He brought already so much happiness into our family and for those around us.