The Joint Oireachtas Committee on the Eighth Amendment produced its report on 20 December, 2017. A minority report emanating from three members of the Committee was also produced on the same day.

The Committee comprised of a majority of parliamentarians who were known to favour abortion. Their inbuilt bias, set against the backdrop to the Committee Report, has created a situation where the next steps will determine not only the future of the Eighth Amendment, but the future of the democratic process itself.

CITIZENS’ ASSEMBLY – FAILINGS IN THE FOUNDATION

At the outset, the committee invited 24 pro-repeal witnesses to present before it and just 3 pro-life witnesses. Then in a most extraordinary move, just three weeks into the twelve weeks of hearings, the committee voted not to retain the Eighth Amendment in full, demonstrating that it had no interest in hearing from all witnesses before making a decision. This move alone undermined the credibility of the committee and put to bed any claim it was conducting itself in a fair and impartial way.

Committee members had a duty to scrutinise and ask hard and searching questions before voting on any proposal, most particularly when it involves a life and death issue like it does in this case.

When it dawned on some committee members how poorly it looked to have voted before the process concluded, they scrambled to issue late in the day invitations to pro-life speakers in an attempt to gloss over the vote and the appallingly skewed line-up of speakers that the committee had invited.

In another disgraceful move, when the two additional pro-life speakers that were invited declined the offer citing the abortion vote that had taken place, committee members publicly attacked them for not accepting the invitation. The same committee members didn’t draw attention to the very legitimate reasons the pro-life individuals gave for not accepting the invitation. Clearly they were being invited to present not because the committee wanted to listen to their expert opinion but because the committee wanted to use them to give cover for the one sided way they had conducted themselves.

PROMISES BROKEN ABOUT HOW COMMITTEE WOULD FUNCTION

WHAT THE OIREACHTAS COMMITTEE SHOULD HAVE EXPLORED

The Constitution recognises that the unborn child in the womb is a unique and separate human being. It guarantees to protect his/her right to life as far as is practicable. In its deliberations the committee failed abysmally to vindicate that right, hardly even mentioning the unborn child in its final report. The following are key areas the Oireachtas Committee should have explored before making any decision regarding the future of the Eighth Amendment:

Humanity of unborn baby – The committee spent zero time discussing the developmental stages of the unborn child. This didn’t stop them passing judgment on babies in the womb and concluding that they were unworthy of any meaningful legal protections.

The baby in the womb feels pain – The committee never sought expert advice to determine whether or not the unborn child feels pain during an abortion at certain stages of development. They proceeded to recommend abortion up to birth without ever scrutinising the research in this area.

Reality of abortion procedure – You would expect any group proposing something new to at least explore what the change would involve. This is particularly true when the proposed changes entail sanctioning the ending of innocent human lives. But aside from hearing from one practising abortionist who was making the case for abortion where an unborn baby has a disability, the committee never explored the reality of the abortion procedure or how the abortion industry has corrupted medicine in other countries where it is openly referred to as ‘healthcare’ when it’s nothing of the sort.

Risks of abortion to women – Abortion has well documented health risks, including mental health risks. The committee recommended abortion on mental health grounds without ever listening to the peer reviewed evidence in this area.

Reality of abortion regret – The interests and rights of women adversely affected
by abortion and the magnitude of their losses was not considered. Even an adjacent committee which was dealing with the mortgage scandal was ready to hear some selected personal stories (despite the wide diversity of people affected by that scandal). Agencies who counsel for abortion regret should have been heard, just as much as those abortion advocates who deny the existence of such after effects from abortion..

Positive alternatives to abortion – The Oireachtas Committee should have considered how the tragedy of women travelling for abortions could be reduced by promoting positive alternatives to abortion. It could have sought to consider the Eighth Amendment in the same light as the recent Children’s Rights Amendment, that is, as a spur to positively protect unborn babies – and recommend specific ways of doing that e.g. perinatal hospice care, support for women experiencing an unexpected pregnancy, counselling support for women who have had abortions.

Impact of repeal on Ireland’s abortion rate – The Oireachtas Committee should have considered how repeal would impact on society. Every abortion on demand regime began as “restrictive” but once the door to legalised abortion was unlocked it was only a matter of time before the grounds for abortion were widened. Over time, abortion becomes normalised. It’s hard to believe it but 1 in 5 pregnancies are aborted in the UK, France and Spain – this is 300% more than the Irish rate. Other countries have learned there is no such thing as restrictive abortion. The committee chose to ignore all of this evidence in its determination to recommend repeal at all costs.

Only one view can be formed on the work of the committee. The majority of members were clear on the outcome they wished to achieve, just as they were clear on the timescale in which they wished to complete their work. In its very choice of experts, the committee broke the rules that it had set for itself. In doing so, it showed total disregard for the demands of democracy, placing the desire for repeal above all other concerns.

Laws shape our attitudes and behaviour. We’ve all seen how attitudes to smoking and wearing safety belts have shifted following changes to the law. The same would happen if the Eighth Amendment were removed. 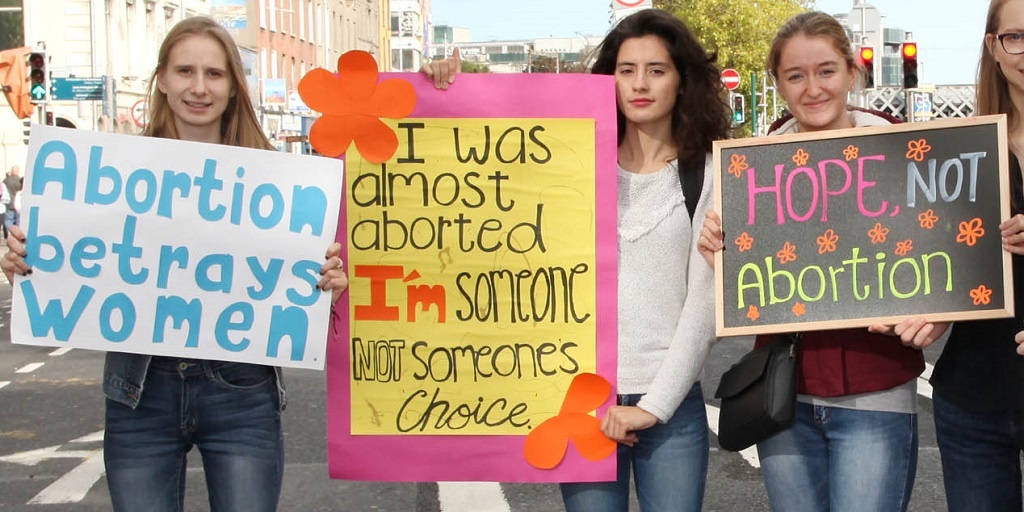 A BETTER VISION FOR IRELAND

The Eighth Amendment has had a hugely positive, humane and life-saving impact on society. Our abortion rates are a fraction of those in Britain.

Rather than look at ways to dismantle this life-protecting provision, we should be building on the life-affirming vision that is at the heart of the Eighth Amendment. We should be focussed on issues that unite our society rather than divide it.

To put things in perspective, in the past five years, we’ve had a government established expert group on abortion, two sets of exhaustive Oireachtas Committee hearings, legislation in 2013, five Private Members’ bills in the Dáil, a Citizens’ Assembly in 2017 and another Oireachtas Committee looking at the issue – all focussed on abortion and broadening the grounds for it. Not one of these committees, assemblies or bills focussed on alternatives to abortion.

The Government is now talking about rushing into a referendum to strip unborn babies of all meaningful protections knowing full well that the Dáil has never bothered to host as much as a single debate exploring positive alternatives to abortion over introducing an abortion regime.

We can do a lot better than abortion for mothers and babies. The sign of a truly caring society is not one that corrupts language to exclude – rather it is one that welcomes everyone in life and protects everyone in law.

LOOKING TO THE FUTURE

The debate surrounding the Eighth Amendment presents two radically different visions of society and human rights. When a particular group of human beings is singled out as undeserving of legal protection, we undermine respect for all human life, born and unborn.

Legalised abortion is part of the old order. It has led to the deaths of millions of innocent unborn babies in the past 40+ years. There is nothing liberal, enlightened or progressive about misusing words like “choice” to sanction the taking of someone else’s life.

Once abortion is introduced in certain circumstances, it’s only a matter of time before the grounds are expanded. That’s the undeniable international experience of legalised abortion.

Human rights never get old. They don’t pass their sell-by-date. The Eighth Amendment is as vital and meaningful today as it was when first introduced.

We cannot sanction abortion and also claim to defend human life. The right to life is the first and most important right. Without it, all other rights are meaningless. We need to work to strengthen the Eighth Amendment, not repeal it.