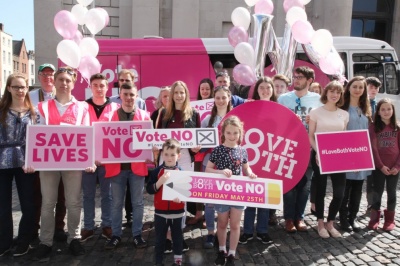 The #LoveBothVoteNo Tour set off from Dublin today on the first leg of its tour around the country. A team of LoveBoth volunteers boarded the bus at City Hall before leaving the city for the tour’s first stops in Mullingar, Carrick-on-shannon and Sligo.

“With less than 3 weeks to go until polling day, the public are becoming more engaged with the debate surrounding the government’s proposal and the fact that a vote for repeal would mean introducing abortion on demand for the first 12 weeks of pregnancy, up to a point when a baby has a beating heart and a face and is moving in the womb. People are also shocked to hear that repeal would mean UK-style abortion up to viability, in effect 24 weeks.

“The bus tour for the next 3 weeks will take us to towns and villages all over the country where we will do street outreaches and canvass blitzes, all with one purpose – to let the public know that a vote for repeal would hand complete power over to the government to make our abortion laws.  They would never again have to consult the people if the Eighth Amendment was taken out of the Constitution and this would leave unborn babies at serious risk.  In countries like Britain, the introduction of abortion has led to a situation where for every 4 babies born, 1 is aborted.”

“We are looking forward to getting out on the road over the next few critical weeks and reminding the public that the only way to stop Ireland becoming like Britain is to Vote No on May 25th.”