Today Conor O’Dowd from Co Louth unveiled a new video for the LoveBoth Campaign where he called for a ‘no’ vote in the referendum.

Commenting on the launch, spokesperson Cora Sherlock said: “We are delighted to be joined by Conor and his family today at the launch of this video. Yesterday Simon Harris said that the government “specifically excluded disability” as a grounds for abortion in the proposed legislation but this is not correct. The reality is that there is no such exclusion in the bill, specific or otherwise. He then went on to say that it was “actually quite disgusting” the way the No side was raising Down Syndrome in the debate. This has been Simon Harris’s typical tactic in this debate – to make outrageous accusations about the ‘no’ campaign and then dodge any debate with the people he is attacking.” 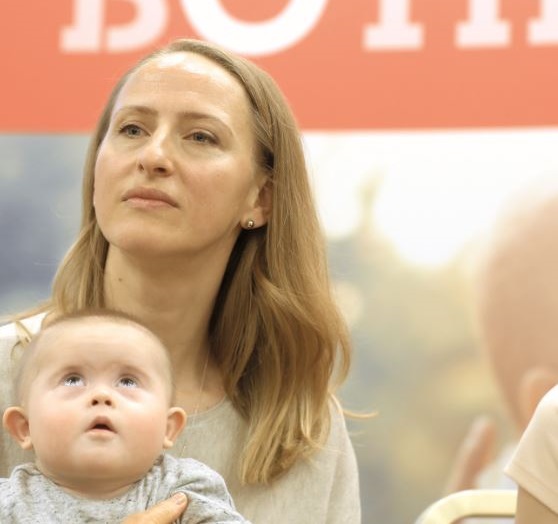 Beautiful baby Cris with his mum Monica at the launch earlier today of Conor O’Down’s video on the Eighth Amendment.

She continued: “Conor is just one of the people with Down Syndrome who have come forward in the last few weeks to speak out against the government’s abortion proposals. Simon Harris and his supporters might prefer if those voices did not form part of the debate but the pro-repeal side cannot hide from the fact that in England and Wales over 90% of babies diagnosed with Down Syndrome in the womb are aborted. Despite his claims, Simon Harris’s abortion plan for Ireland contains no restrictions preventing abortion for Down Syndrome.”

“Unrestricted abortion up to 12 weeks and then up to 24 weeks on vague mental health grounds would result in the abortion of people with Down Syndrome. Already three obstetricians, Dr Peter Boylan, Dr Rhona Mahony and Dr Fergal Malone all confirmed last week on the radio that abortions happen after Down Syndrome is detected by new medical tests and that it can be detected as early as 10 weeks with 99% accuracy. Minister Simon Harris cannot hide from these facts. He wants to airbrush people with Down Syndrome out of this debate, but we won’t let him.”

She concluded: “The only way to protect unborn children with Down Syndrome is to vote ‘no’ on the 25th of May.”