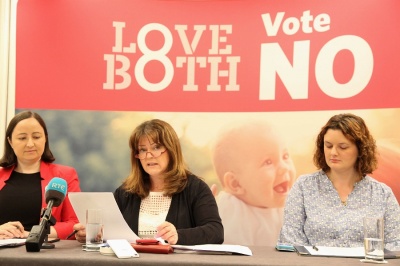 The LoveBoth campaign held a press conference this morning to launch an independent actuarial report*   to review the potential effect of a vote for repeal on Ireland’s abortion rate.

“Minister Simon Harris has previously drawn comparisons between his proposed law and the abortion laws in other European countries. On that basis, we decided to accept the Minister’s point and commissioned an actuarial report to examine what could happen in this country if his law was enacted, with a focus on projected numbers of abortions.”

“The Government’s proposed law allows for abortion, without restriction, until 12 weeks of pregnancy, and abortion until approximately 6 months on other grounds. There are 7 western European countries with broadly similar abortion laws (Belgium, Denmark, Finland, France, Germany, Portugal and Switzerland). Based on a very conservative analysis, the report suggests that if Ireland had the same average abortion rate as these 7 countries, we would have 64,000 more abortions up to 2030; this equates to 5,300 per year and more than 100 extra per week.”

“The numbers in this report make for stark reading, and so far in this debate there has been very little information from Simon Harris regarding the impact of his abortion law on abortion rates in Ireland. If the Department of Health have carried out such an analysis, they have been very slow to release it. Perhaps there is a good reason for that – the Minister does not want to discuss the fact on a reasonable analysis, there may be over 5,000 more abortions per year in Ireland.”

“Laws shape our attitudes and our behaviours. When something is legalised, it is normalised, and it almost inevitably becomes more common. It lacks credibility to argue that this would not happen in Ireland with abortion. The Government’s plan is for abortion to be widely available through a GP-led service; it strains credibility to claim that such a radical policy shift would not result in more abortions. It is often argued by abortion campaigners that abortion rates do not increase after legalisation. But the facts tell a different story. In England and Wales the number of abortions post-legalisation rose from 22,000 to 100,000 per annum in just 4 years. Even in countries where abortion rates decline after initial increases, they remain higher than at initial legalisation and are also higher than the Irish rate with the 8th Amendment.”

“Minister Simon Harris says that he wants abortions to be “rare”. But an analysis of the abortion rates in the countries with the same law he proposes for Ireland indicates that abortion would be anything but rare. It’s time for Simon Harris to be honest with the Irish people and directly address what can happen if his abortion on demand proposals are introduced.”